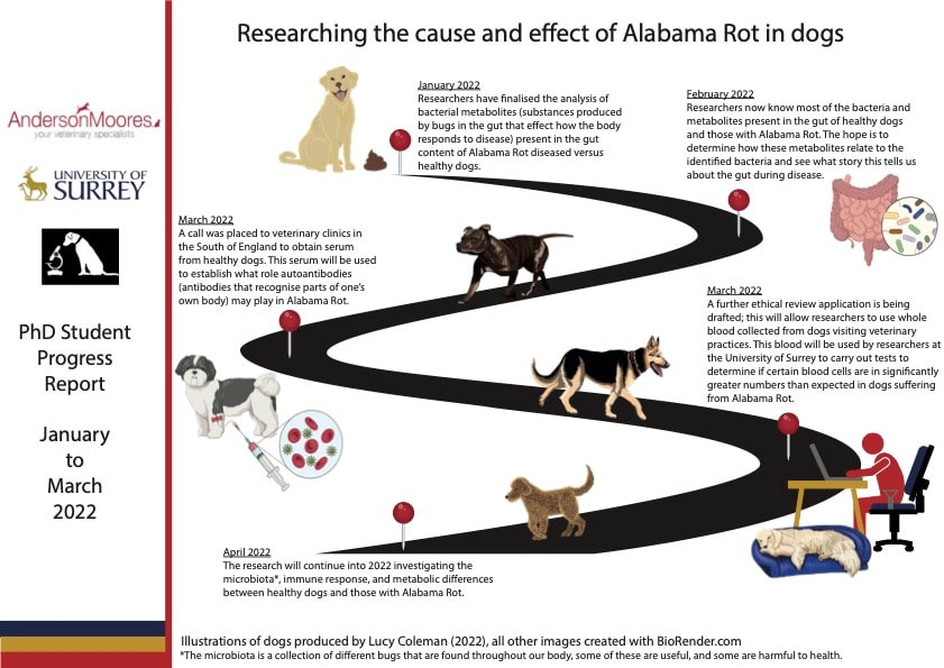 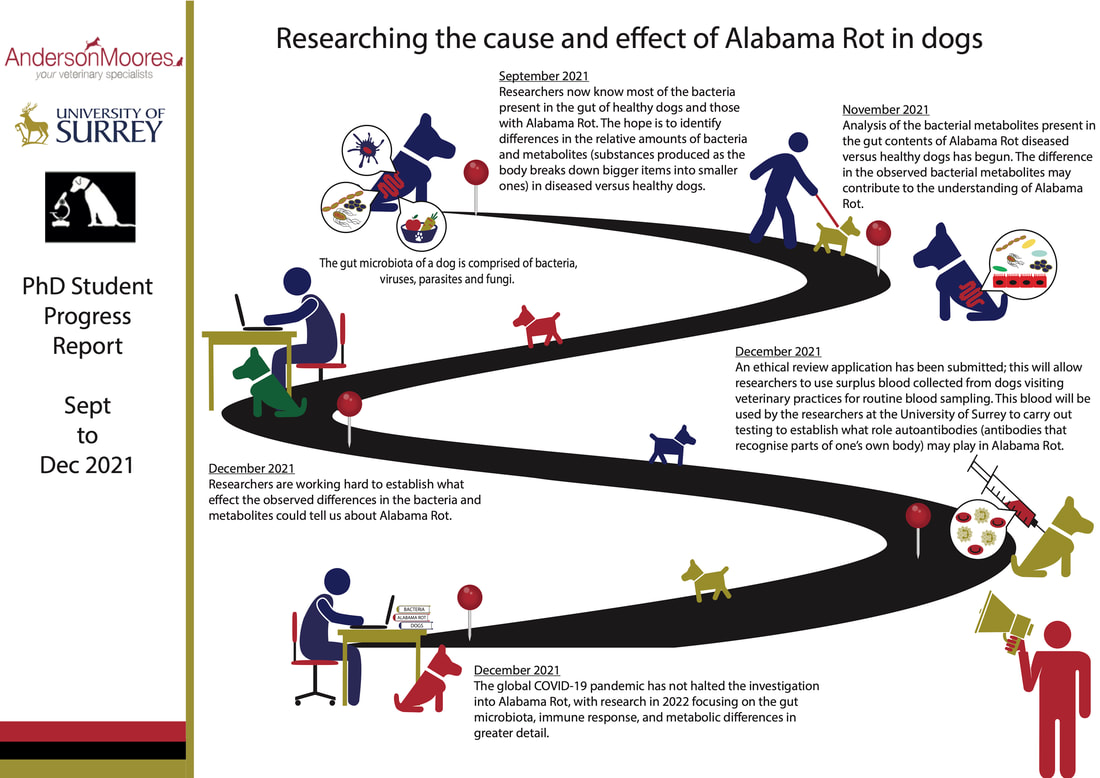 Progress report  June – September 2021
1. Metabolic profiling of faecal samples from CRGV affected and healthy dogs
Faecal samples from dogs with Cutaneous and Renal Glomerular Vasculopathy (CRGV) and healthy dogs have been processed to collect faecal water (the liquid within the faeces). The faecal water may contain information on the metabolites (substances produced as the body makes bigger items into smaller ones) present in the bowel/gut of CRGV affected and healthy dogs. Performing metabolic profiling (identifying the substances) will reveal how much and how many metabolites are present and the differences in the relative amounts of metabolites between healthy and CRGV affected dogs. Unfortunately, due to the ongoing COVID- 19 pandemic, the final 96 samples have not been processed. However, these samples will be processed at the end of September 2021.
2. Detecting the presence of autoantibodies in CRGV affected dogs as a predictor of disease.
The groundwork is being laid for the collection of blood from CRGV affected, comparative-CRGV (dogs with kidney disease that isn’t caused by CRGV), and healthy dogs to detect a certain type of antibody called autoantibody anti-neutrophil cytoplasmic, or ANCA for short. An antibody normally helps the body neutralise a foreign invader such as a virus. ANCA actually targets white blood cells that play a role in maintaining health and fighting infection, this targeted attack causes inflammation of small blood vessels. The inflammation seen in ANCA cases is similar to the inflammation seen in CRGV confirmed cases. Therefore, we will be detecting the level of ANCA in CRGV affected dogs which will allow us to determine if ANCA plays a role in the disease process of CRGV. We hope this study will produce the first predictor of canine CRGV, allowing veterinarians to make a rapid diagnosis of CRGV.
3. Further microbial community profiling of the CRGV affected gut.
Faecal samples from CRGV and healthy control dogs have been prepared for sequencing (detailed analysis) using an advanced technique (microbial community profiling). This approach will provide information on the bacteria present and the differences between the gut of CRGV affected and healthy dogs. Differences in faecal bacterial amount and type may reveal what organisms could be involved in the disease process of CRGV. This will build upon the previous research mentioned in the December 2020 – May 2021 progress report.
In summary, over the past three months the study has:
Progress report December 2020 - May 2021​
​
​Since the previous progress update (infographic) a number of objectives have been completed, and work is underway with the other aims outlined in the PhD project.

1. 16S rRNA data has been analysed (microbial community profiling)
Faecal samples were collected from dogs with Cutaneous and Renal Glomerular Vasculopathy (CRGV) and from healthy controls and sequenced using 16S rRNA gene sequencing. The data were analysed using a bioinformatic pipeline. The sequencing data were examined to investigate alpha- and beta-diversity. Alpha- diversity explores the total number of species present within a whole group, while beta-diversity explores the total number of species and the relative abundance of these species in individual samples. Sequencing of the faecal microbiome populations revealed groups that were overrepresented in the CRGV cohort in comparison to the healthy control cohort.

2. Processing CRGV and healthy control samples via 1H Nuclear Magnetic Resonance (1H NMR) (metabolic profiling)
The metabolic profile of CRGV affected dogs is being investigated to complement the microbial profiling of the gut microbiota. The metabolic signature of each sample contains thousands of molecular components that reflect biochemical events occurring within the gut microbiota, and we hope to see whether there is a characteristic metabolic profile associated with CRGV. Hopefully, this will prove effective in identifying novel biomarkers (e.g. glucose and short-chain fatty acids) associated with disease onset and potential disease susceptibility. Analysis of faecal water samples is the first aspect of this study and is being carried out in collaboration with a partner institution.
​
3. Clinical pathology- determining the presence of Anti-neutrophil Cytoplasmic Antibodies (ANCAs) as a potential predictor for CRGV
Enzyme-linked immunosorbent assay (ELISA) has been used to detect ANCAs in serum samples from affected and case-control dogs. ANCAs are being investigated because post-mortem examination of tissues from CRGV patients has previously revealed vasculitis of the glomerular arteries and surrounding tissue, typical hallmarks of ANCA associated vasculitis (AAV). ANCAs is a variable serological marker associated with vasculitis in a heterogeneous group of disorders characterised by inflammation and necrosis of small- to medium-sized blood vessels. Therefore, ANCAs could be used as markers for disease prediction and/ or monitoring disease progression.
In summary, over the past 6 months the study has:
Update from from Jack Whitehouse, PhD researcher, January 2021

Jack, the new PhD researcher has sent the attached introduction to himself now that he has started in his new role.
​